By Erica Rose JeffreyDecember 19, 2022No Comments

Sydney Opera House – Dancing Connections event:
Dance for Parkinson’s with dancers of The Phantom of the Opera – 11 October 2022
Article by Jenny Dennis 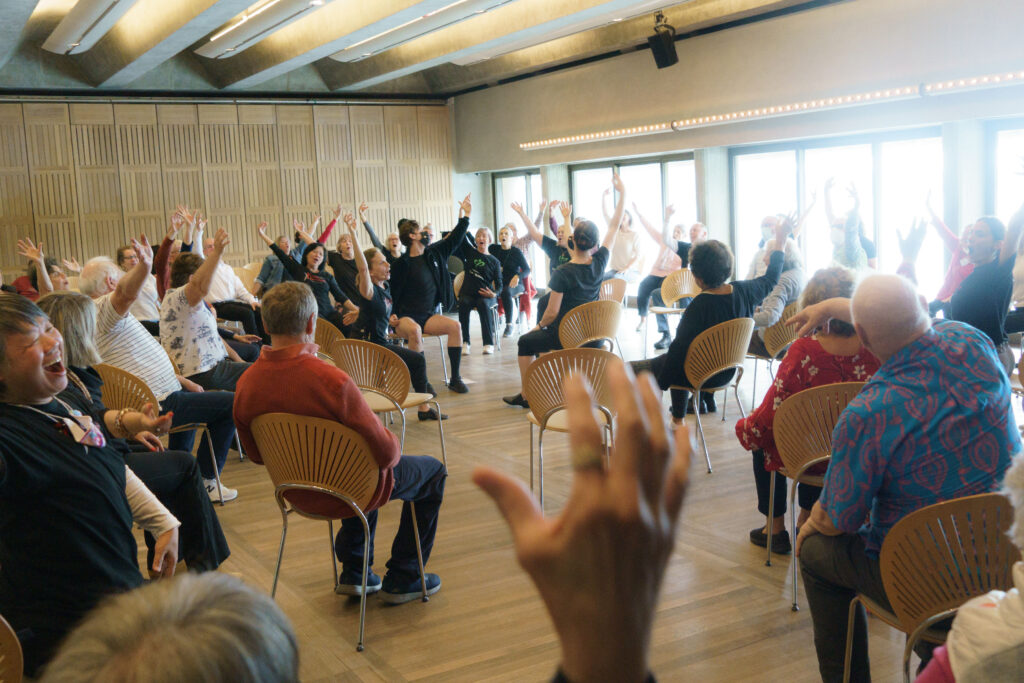 People with Parkinson’s and their families and friends gathered at the Sydney Opera House to participate in an open community dance class led by creatives with Opera Australia’s – The Phantom of the Opera. Dance Captain Olivia Jenkins, and Assistant Dance Captain Aaron Lynch and pianist Loclan MacKenzie-Spencer led the class.  70 people with a range of dance experience filled the Utzon Room.  This is the annual open community class organised by Dance for Parkinson’s Australia  in association with the Sydney Opera House Access Program to provide a class for people living with Parkinson’s, their families and friends, connecting with professionals in a beautiful theatrical setting.

Cathie Goss and Kirsty Arnold, co-taught the class alongside Olivia and Aaron. Their infectious enthusiasm and professionalism, in running a multi- level class, was clear from the start.  Forming a series of circles of chairs, the class progresses from seated, to standing behind the chairs, to movements across the floor.  This framework has a similar progression to a typical dance class, but with a difference.  The chairs provide support, like the barre in a ballet class, but remain an integral part of the class, depending on the capacity and inclination of the dancer. 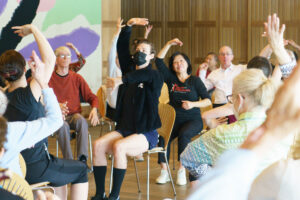 What participants loved about Dancing Connections is that it was led by young professional people who were willing to adapt their art and share their skills with people living with with Parkinson’s.  Brian Suters, who has had Parkinson’s for some years travelled 2 hours with his wife and 6 other people from the Newcastle region to attend the class.  This group attends a regular class led by Jess Conneely, a well-recognized teacher and leader in the Dance for Parkinson’s movement.  Brian loved the atmosphere of the class. The thrill of attending a dance class by members of the Opera at the Opera House was a wonderful experience. As Brian said, “How many 85-year olds can still dance in the Opera House, with or without Parkinson’s!” 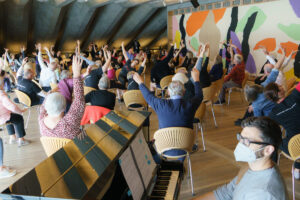 Brian contends that participating in a regular weekly dance class has increased his confidence and decreased his anxiety and now he says he rarely needs his walking stick for balance. He says that his doctor endorses his dance class and is thrilled with his progress.  Brain also notes that a friend of his with Parkinson’s has declined much faster than he.  While everyone’s experience with Parkinson’s is different, Brian believes the dance class has made a big difference to him in maintaining his physical capacity as well as delivering improvements. He also talks fondly of the class as a family of people who share a similar problem but enjoy the pleasure of dancing together.  Class is a relaxed and happy time where medical issues can be put aside, as they work together to improve their dancing.

Most dance classes for people living with Parkinson’s use rich imagery, humour, and story-telling techniques to inspire movement.   As the class progresses the dancers became more confident and focussed on following the well- crafted movement exercises, forgetting their limitations. Judgment is suspended, replaced with a desire “to have a go” and to reach out to the other people in the class.   As the dancers settle into the class a sense of community is established between the participants that often transcends the class environment.

On Tuesday the dance leaders, Olivia Jenkins and Aaron Lynch of the Phantom of the Opera took centre stage.  Olivia, a Sydney trained ballet dancer, with 10 years dancing  with leading ballet companies in Europe, shared snapshots of the repertoire from The Phantom of the Opera.  Complicated choreographed works from the Opera were distilled into movement phrases for the class without undermining the integrity of the movements.

Olivia shared after class that she was impressed that the participants were “so appreciative of the class, uninhibited, and easily led” by Aaron and herself. She said, she thought that Dance for Parkinson’s should be applauded for making dance accessible for people with Parkinson’s and that “ they were brilliant!”

Olivia, while new to teaching this type of class, is not new to the ethos of a class of this type.  At the beginning of the class Olivia said that her Great Aunt Mali Jenkins was the Founder of The Parkinson’s Disease Society in the UK in the 1950s, now Parkinson’s UK. This is a well-established organisation providing cutting edge research and services for people with Parkinson’s in the UK.

As the recent ABC’s Catalyst Program, Keep On Dancing so clearly reveals, dancing is much more than fun.  It can change our physical outcomes, especially for seniors.  Keeping on dancing is clearly beneficial.  The ongoing debate will be to what extent!

For more information on how to get involved with Dance for Parkinson’s Australia:

EMAIL US
PHONE US

Given the many changing contexts please check with local teachers regarding in-person scheduling.

Want to join an online or on-demand class? Go to our Resources page on to Find a Class and the online tab.

Want to explore other classes?

Click here to tune in live classes in New York and to access the free Dance for PD resources.